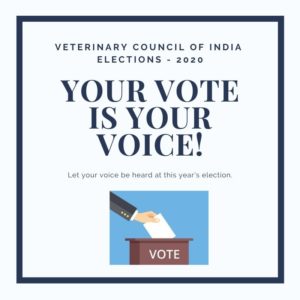 VCI elections are round the corner and there is lot of buzz regarding the same in the popular culture. Every now and then, the social media pings with the campaigns and promotions, messages related to achievements of the contestants, manifestos, and what not. Although COVID-19 have changed many conditions but using digital technologies, contestants are reaching their target voters in fraction of seconds and impressing them to give them the required mandate.

As per the Indian Veterinary Council Act, 1984, the council shall consist of 27 designated officials out of which 25 shall be members, one each ex officio Animal Husbandry Commissioner and Secretary, VCI. Among 25 members, 14 shall be nominated by the Central Government and 11 members shall be elected by the persons enrolled in Indian Veterinary Practitioners Register (IVPR). The details of the designated officials as per IVC Act, 1984 are provided hereunder:

Further, it is provisioned in IVC Act, 1984 that the President and Vice-President of VCI shall be elected by the members from amongst themselves as per regulations. The names of persons nominated or elected as members shall be notified by the Central Government in the Official Gazette of India. For maintaining the professional integrity in the council, it is mandatory that a person aiming to contest should hold a recognized veterinary qualification included in the First Schedule or the Second Schedule of IVC Act, 1984.

The President, Vice President and Members shall hold office for a term not exceeding three years. Members of the Council shall be eligible for re-nomination or re-election

Under rule 6 of IVC Rules, 1985, the Registered Veterinary Practitioners throughout the country were given 15 days period from the date of publication of the electoral roll in draft to claim for inclusion and updation of their name, mobile number for the purpose of online VCI election.

As per the Office Memorandum of Returning Officer, Dated 16.07.2020, 100 candidates filed their nominations through online mode/post or in person. Three candidates were rejected during scrutiny and five candidates filed their withdrawal forms. A total of 92 contesting candidates have been validly nominated and have not withdrawn their candidature within the stipulated time for contesting election of 11 members to the Veterinary Council of India.

The mode of voting is online. Department of Animal Husbandry & Dairying have created a dedicated portal for online voting which can be accessed at https://vcievoting.dadf.gov.in/. After creating your username and password you can vote on the aforementioned dates and time. Each voter can cast a maximum of 11 votes in favour of 11 different individuals for making them victorious as ‘Members’ of VCI.

Veterinarians are considered as ‘doctors of the poor and needy’ and represent a noble profession. Will Rogers have aptly quoted, “Personally, I have always felt that the best doctor in the world is the Veterinarian. He can’t ask his patients what is the matter… he’s just got to know.” Being representatives of such noble profession, veterinarians do face issues which need to be addressed. Extending Dynamic Assured Career Progression (DACP), Non-Practicing Allowance (NPA), time bound promotions and notional benefits, protection of veterinarians and social respect being a few of them. Let’s vote for the one who at least make distant dreams nearer and stand for the welfare of veterinarians and profession in India.

Wishing best to all the 92 contestants!

©Author’s Copyright. Do Not Copy. You Are Smart To Write Your Own!